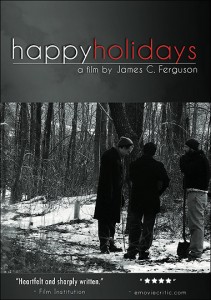 A fantastic comedic ensemble cast from stage, screen and television come together in a black and white indie comedy about friendship, the holidays…and religious pluralism. An Atheist, a Catholic and a Jew walk into a bar… What starts as a punchline blooms into Happy Holidays, a comedy about friendship, family and faith. Three childhood friends unexpectedly reunite in their New England hometown the week before Christmas. Now in their mid-thirties, it’s the first time Patrick, Alden and Kirby have been in the same zip code since their high school graduation. Each of them is at a different crossroads in his life and facing difficult hurdles. They try to pick up where they left off, a simpler time — before obligations, politics, agendas — but has life taken them too far to make that possible?

AVAILABLE ON THE FOLLOWING PLATFORMS

” … an independent movie about family and friends coming together during the holiday season but with a nicely twisted sense of humor … The movie, shot in black and white, captures the look of a small New England town in winter perfectly and it delivers its story with a nice balance of acerbic humor and genuine sweetness (though don’t worry – the sweetness here is more Lemon Drop martini than candy cane).”

“Move over, Woody Allen—there’s a new guy in town!  “Happy Holidays” is a fantastic human comedy-drama. … The film is perfectly balanced with liberal doses of humor, some of it subtle while some is laugh-out-loud funny. … The writing is just great. This is a very talky film, with many long scenes of dialogue.  This can be a very slippery slope on which to walk.  We’ve all seen films where long dialogue scenes become clunky and boring, but in the nimble hands of Mr. Ferguson, a perfect balancing act is created.   … The cast is outstanding. … [“Happy Holidays”] is an absolute treat and will take its place along with “A Christmas Story” and “It’s a Wonderful Life” as one of my absolute favorite Christmas-themed films.”

“4 stars … [Happy Holidays] is, simply, a well-told story about interesting characters, the indie cinema version of a comfortable, clever novel. … There’s enough sharp humor and witty dialogue to bring up memories of, say, Woody Allen … Ferguson and Misuraca’s screenplay lives and breathes in the little moments, the corners of the action. Throwaway comments are gold, tiny bits of business that give the story an extra layer of rich detail. … Hungerford is fabulous in [his] role, if only for showing enough restraint to avoid turning Patrick into an unlovable, wishy-washy loser … Rhoads and Crye are unafraid to make their characters unlikable, knowing that we’ll come around to their sides eventually.”

“A – … A surprising and entertaining holiday entry from co-writer/director James C. Ferguson. In a more opportune time and less competitive movie climate, it might even have an outside shot at an Oscar … while it certainly has it’s moments of sentiment, “Happy Holidays” earns each one while maintaining an irreverent yet respectful tone to each character, the backgrounds that have shaped them, and the situations that have each one unsure of what they want this holiday season … By the end of it, I was thinking that Christmas had come early for me.”

“Happy Holidays is one of those rare films where the viewer comes away a deep appreciation of the story, the writing, the acting, and the production qualities. … The dialogue from Ferguson and co-author Thomas J. Misuraca is superb and the actors’ delivery is perfect. … Happy Holidays is not a perfect film, but it comes so close to it that we are not about to quibble.”

“With its stark black and white visuals, jazzy score and often funny dialogues … this might at first appear to be a distant cousin of Woody Allen, though in reality it hews closer to the work of Sideways director Alexander Payne.”

“ … [Happy Holidays] is a gorgeously photographed “walk and talk” indie lensed by cinematographer Josh Blakeslee with beautiful black and white photography that gives it both a nostalgic feel a la Judy Berlin and classic Woody Allen … The film compels with its tireless determination to generate laughs from relatable situations and genuine characters whom we’re both invested in and empathize with — flaws and all … Heartfelt and sharply written– the film believably launches into the complexities of human relationships … [Happy Holidays] fills a definite need in independent cinema to move away from the plots of twenty-somethings along with the endless parade of films about addicts, dysfunctional families, and characters who hate each other and don’t resemble anything remotely real and into the dynamics of older characters and situations that are true, funny, optimistic, and entertaining.  While [Happy Holidays] does have the feel of a really great stage play at times — the versatility of the actors thankfully manage to break down those walls fairly quickly with impeccable comic timing as they work from Ferguson and Misuraca’s genuinely hilarious script.”

“Happy Holidays was nothing but an absolute delight to sit through … Ferguson crafts a very sensitive tale through a very deft hand of crafty wit in its screenplay, and excellent dialogue amongst characters that feel genuine and as real as you can get with your own get-together with friends. It’s a comedy about friendship, family and faith, with some really touching themes about coming to terms, acceptance and reconciliation … Razor sharp dialogue [that] comes across as music to the ears, aided by the excellent delivery by its cast … A quality production.”

“Happy Holidays is not your standard Christmas film, primarily in that it isn’t constantly reminding you it is a Christmas film. … Happy Holidays brings its fare share of bitterness and resentfulness to the screen, but rather then rely on ridiculous sight gags and pratfalls to heal the divides, writer/director James C. Ferguson instead laces the dialogue with acerbic wit and real pathos. … This is a darkly comic film that skillfully mines these potentially off-putting subjects with relative grace and surprising wit. … [Happy Holidays] pleases without pandering and it never overstays its welcome. And with its low-key approach it is a Christmas film that can be watched and enjoyed any time of the year.”

“[Happy Holidays] is sweet and the story substantial. Like a modern telling of story from the bible, the three wise men bear gifts that pale in comparison with the one they receive. … The humor is tart … The dialog is tight … The small movie that asks for laughs and tears is at times overwhelmed by the endeavor, but the story is carefully spun out like garlands around a Christmas tree, with only a few pine needles left on the carpeting.

” … don’t let the simple style of this movie influence your opinion of its substance.  [Happy Holidays] packs a lot of story into an hour and forty-three minutes of two-toned cinema. … The script in this movie is quite good, and the dialogue definitely feels realistic. … The movie certainly flowed well from scene to scene as we followed the characters on their journey as they rediscovered their friendship, and worked on getting over their hang-ups with each other, as well as themselves. It’s very much a feel-good holiday movie that, even in the heat of July I found myself enjoying.”

“I laughed, I cried! Well, okay, I laughed. A lot. This charming and witty Holidays provides plenty o’ chuckles and even warms the cockles. And really, how many holidays can you say that about?”

“Happy Holidays is another new, frequently funny if less-than-“merry and bright” Christmas story. … The talented James C. Ferguson, who wrote and directed Happy Holidays, seems to have taken many cues from the cinematic master of East Coast angst, Woody Allen. … The photography is great  … Most of Happy Holidays is smart and frequently amusing, especially its score that has fun with Christmas and period music stylings.  The opening jazzy title music instantly brings Charlie Brown’s Christmas Time is Here to mind and the film’s closing song, Generic Winter Holiday, is a hoot.”

“Wonderful … Happy Holidays manages to be both fun and serious at the same time – no small feat for an independent film. … The film is a welcome antidote to our annual summer Hollywood blockbuster season – it features nary a cartoon character, action hero, car chase or gratuitous sex scene. (I know this will disappoint some viewers, but there you go.)”

“It has long been an American tradition to go home or Christmas and here is a film that takes us to Connecticut where three friends reunite during the holiday. Here is a story about growing up, growing apart and then coming together. But it is a bit deeper than that – this is a comedy but it takes a deep look at perception and reality and how we make things difficult for ourselves. … [Paul Hungerford] is perfect as Patrick as a down-to-earth guy with problems but with enough wit to be clever. … I absolutely love the wit in this film and this is a real talkie. Pay careful attention or you might miss a wonderful pearl of wisdom.”