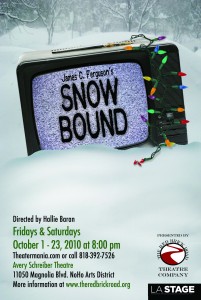 Cabin fever is taken to the extreme in this full-length play by James C. Ferguson. When Mark, a struggling screenwriter, flies to visit friends, David and Pam, in the Midwest, the snow comes along too, bringing the three a little too close for comfort. A weekend of low-key, superficial frivolity quickly devolves into nearly a week and a half of misdirected anger; emotional outbursts and suspicion when the trio realizes they can’t — for any reason — leave the house. Of course the way the relationships are unraveling, they might fare better out in the storm.

The play takes place over a span of several days. Due to the characters being trapped in the house and unable to leave because of the snow, it becomes increasingly messy. At one point, as tensions are peaking, the storm knocks the power out and the characters are forced to bundle up, using anything they can find.